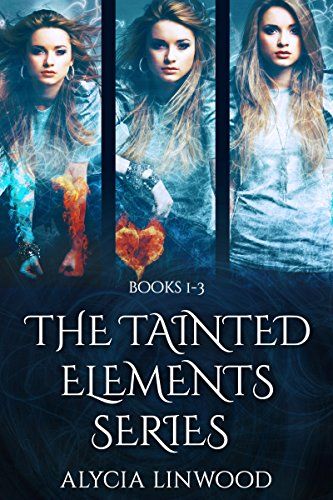 Need your Urban Fantasy fix! Check out Alycia Linwood who is a big fan of this genre.

The first three books in the Tainted Elements series.Different (Book 1)Eighteen-year-old Moira, an air elemental, never thought that waking up with an unusual blue fire on her arm would turn her life upside down.Determined to figure out why she has an element she shouldn't have, her parents take her to a secluded island to keep her safe from anyone who might want to experiment on her.There she meets Noah, a boy who seems to know a lot about her elements. As he introduces her to a group of a new kind of elementals who are more powerful than anyone could have imagined, she doesn't know if she can trust them, especially because the group's leader, Jaiden, has an extremely dangerous ability.But when her parents get kidnapped by a mysterious man, she has no choice but to turn to Noah and Jaiden for help.Invisible (Book 2)Moira faces new challenges as she finds herself in the hands of the enemy. Determined to escape and keep everyone she cares about safe, she has to do things she's never even dreamed of doing, including trusting the one who betrayed her...Monster (Book 3)Moira goes back to Elemontera as a double agent with one goal: to destroy it. But as her elements get more and more out of control, she could end up doing things that will haunt her forever.