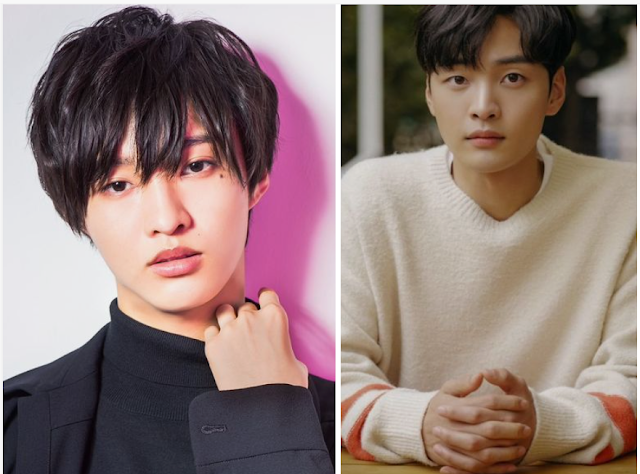 Kim Min Jae on the right is from S. Korea while Sato Arata is from Tokyo. Both are trainees in the boyband industries. Jae is twenty-five and quite the entertainer and has grown up in K-dramas while Arata is twenty-two and possibly newer to the J-pop world. Although, both are really wonderful actors. Jae has had some really good roles and he get better and better in a period piece or even a rom-com. Arata hasn't been in that many J-dramas, but I'm sure the more he does more roles will find him.
Arata is in the new BL drama that I will post about later. Jae will be doing two seasons of the period piece Poong, the Joseon Psychiatrist. This one gives some room for fun. And he is showing he's just as good with a serious role as he is with comedy too.
Of course, I like both actors. It was just interesting to see how these two remind me of each other. Yet, I can see who is the seasoned actor. Jae has paid his dues in a lot of K-dramas over the years while being a trainee. He had such a small part in the beginning of Goblin, but it was a significant part. His first main role came in 2015 in BECAUSE IT'S THE FIRST TIME which is one of my favorite K-dramas. So I can only hope Sato Arata can get more chances to show he's more than just a guy from a boy band.
Posted by ellie at 12:00 AM