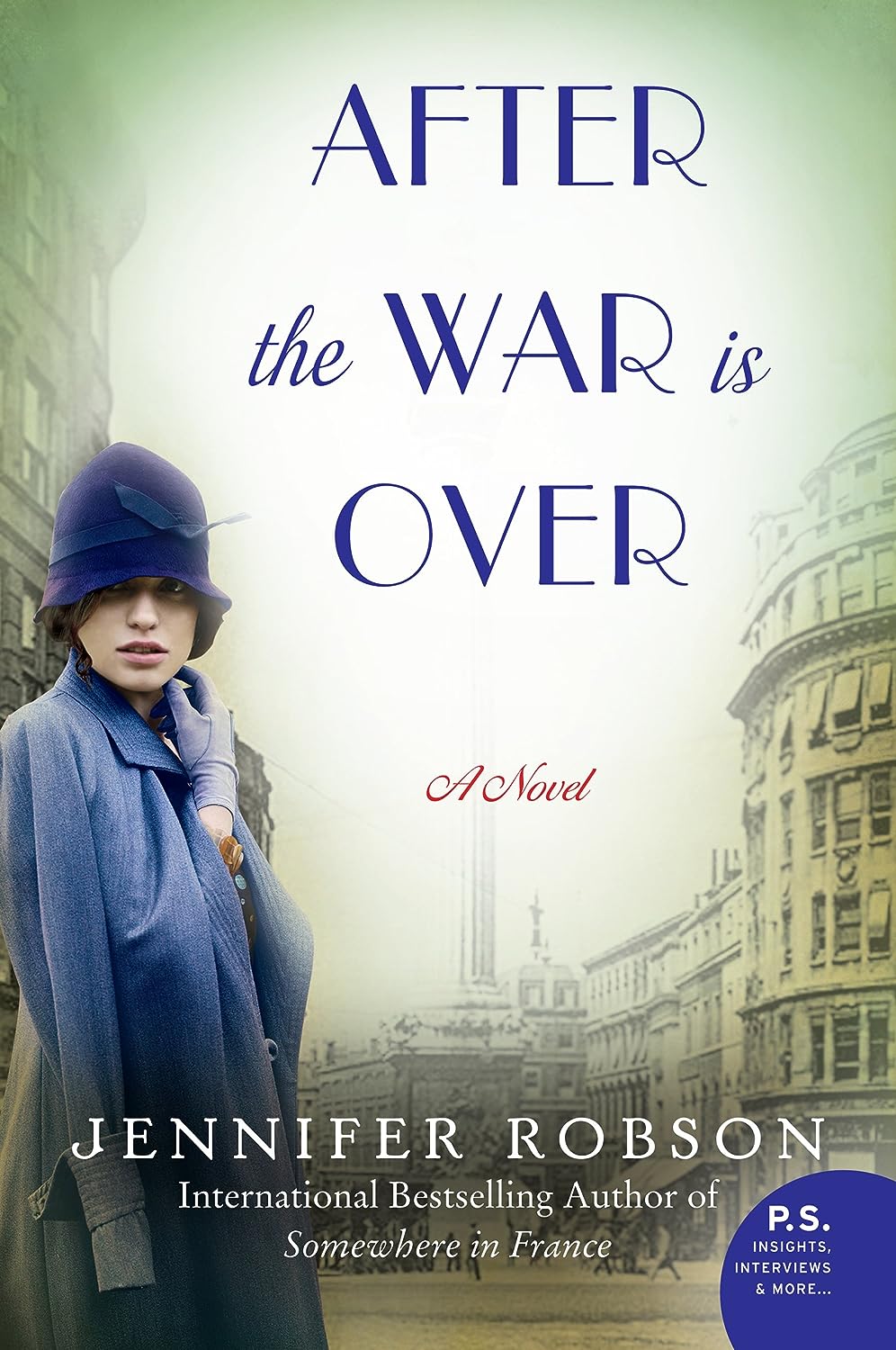 After the War is Over: The International bestselling author of Somewhere in France returns with her sweeping second novel—a tale of class, love, and freedom—in which a young woman must find her place in a world forever changed.

After four years as a military nurse, Charlotte Brown is ready to leave behind the devastation of the Great War. The daughter of a vicar, she has always been determined to dedicate her life to helping others. Moving to busy Liverpool, she throws herself into her work with those most in need, only tearing herself away for the lively dinners she enjoys with the women at her boarding house.

Just as Charlotte begins to settle into her new circumstances, two messages arrive that will change her life. One, from a radical young newspaper editor, offers her a chance to speak out for those who cannot. The other pulls her back to her past, and to a man she has tried, and failed, to forget.

Edward Neville-Ashford, her former employer and the brother of Charlotte’s dearest friend, is now the new Earl of Cumberland—and a shadow of the man he once was. Yet under his battle wounds and haunted eyes Charlotte sees glimpses of the charming boy who long ago claimed her foolish heart. She wants to help him, but dare she risk her future for a man who can never be hers?

As Britain seethes with unrest and post-war euphoria flattens into bitter disappointment, Charlotte must confront long-held insecurities to find her true voice . . . and the courage to decide if the life she has created is the one she truly wants. 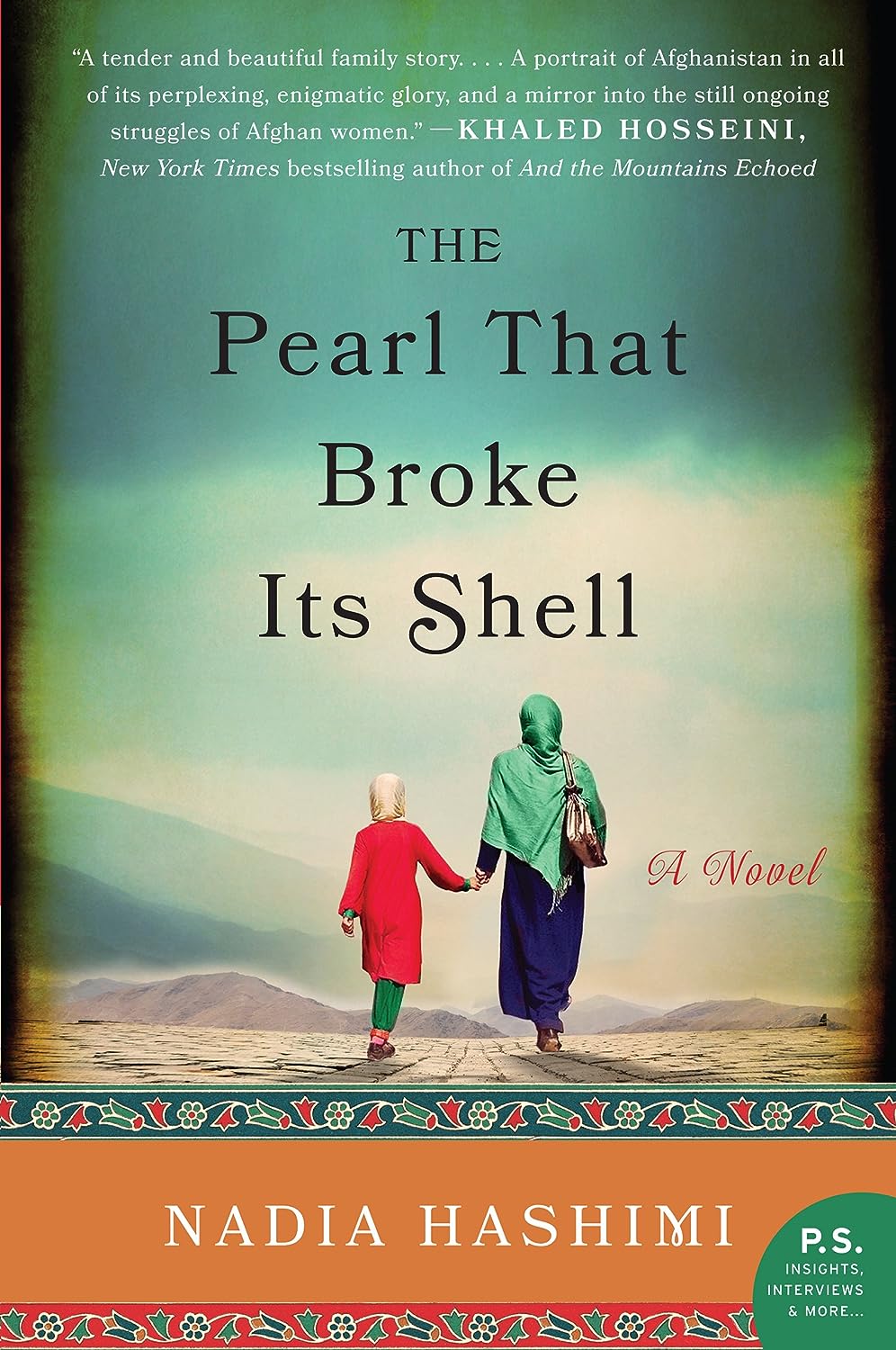 The Pearl that broke its Shell: Afghan-American Nadia Hashimi's literary debut novel is a searing tale of powerlessness, fate, and the freedom to control one's own fate that combines the cultural flavor and emotional resonance of the works of Khaled Hosseini, Jhumpa Lahiri, and Lisa See.

In Kabul, 2007, with a drug-addicted father and no brothers, Rahima and her sisters can only sporadically attend school, and can rarely leave the house. Their only hope lies in the ancient custom of bacha posh, which allows young Rahima to dress and be treated as a boy until she is of marriageable age. As a son, she can attend school, go to the market, and chaperone her older sisters.

But Rahima is not the first in her family to adopt this unusual custom. A century earlier, her great-great grandmother, Shekiba, left orphaned by an epidemic, saved herself and built a new life the same way.

Crisscrossing in time, The Pearl the Broke Its Shell interweaves the tales of these two women separated by a century who share similar destinies. But what will happen once Rahima is of marriageable age? Will Shekiba always live as a man? And if Rahima cannot adapt to life as a bride, how will she survive? 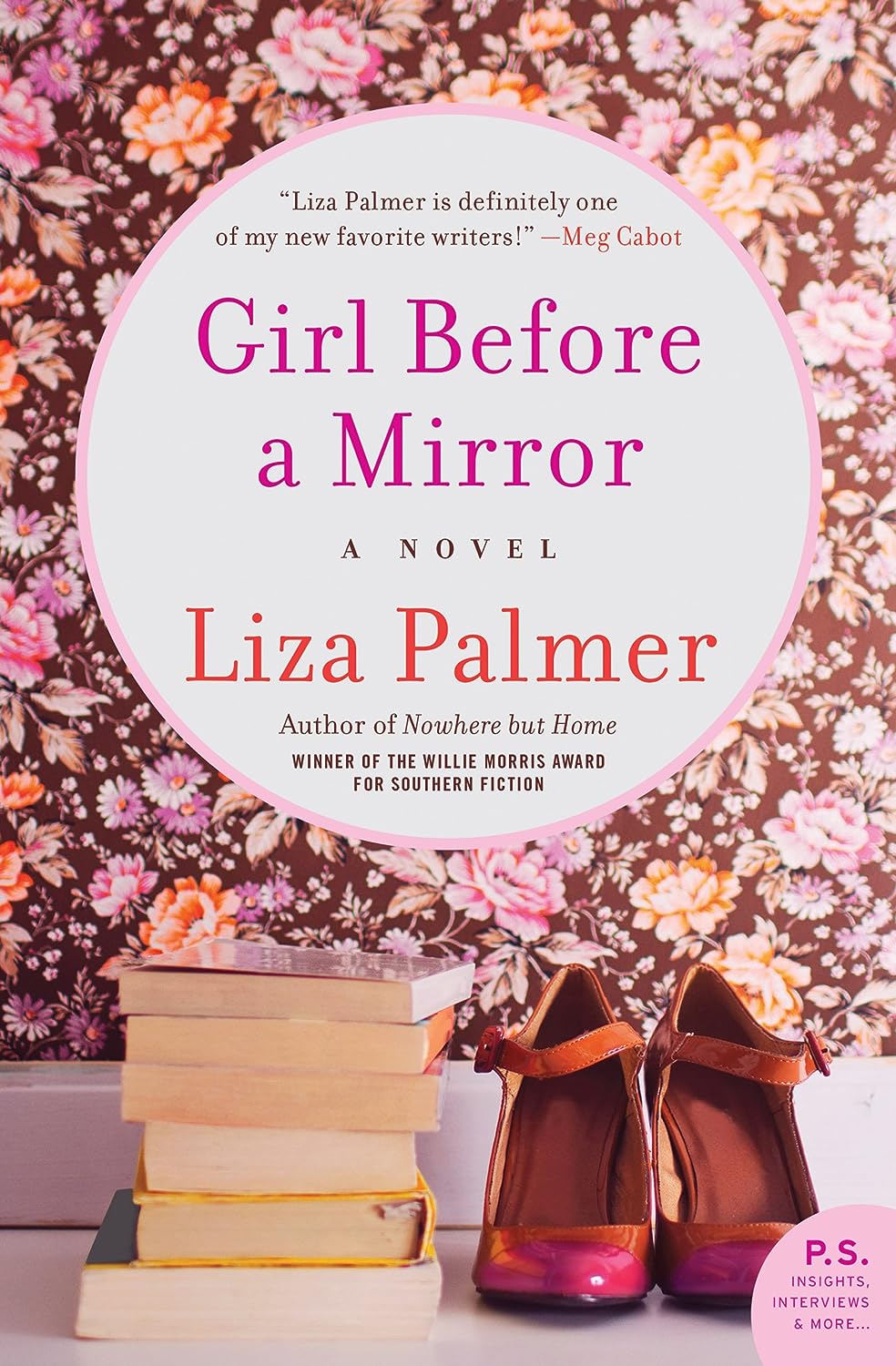 Girl Before a Mirror (out on Jan.27th): The author of Conversations with a Fat Girl—optioned for HBO—returns with the hilarious and heartfelt story of a woman who must learn how to be the heroine of her own life—a journey that will teach her priceless lessons about love, friendship, family, work, and her own heart.

An account executive in a Mad Men world, Anna Wyatt is at a crossroads. Recently divorced, she’s done a lot of emotional housecleaning, including a self-imposed dating sabbatical. But now that she’s turned forty, she’s struggling to figure out what her life needs. Brainstorming to win over an important new client, she discovers a self-help book—Be the Heroine, Find Your Hero—that offers her unexpected insights and leads her to a most unlikely place: a romance writers’ conference. If she can sign the Romance Cover Model of the Year Pageant winner for her campaign—and meet the author who has inspired her to take control of her life—she’ll win the account.

For Anna, taking control means taking chances, including getting to know Sasha, her pretty young colleague on the project, and indulging in a steamy elevator ride with Lincoln Mallory, a dashing financial consultant she meets in the hotel. When the conference ends, Anna and Lincoln must decide if their intense connection is strong enough to survive outside the romantic fantasy they’ve created. Yet Lincoln is only one of Anna’s dilemmas. Now that her campaign is off the ground, others in the office want to steal her success, and her alcoholic brother, Ferdie, is spiraling out of control.

To have the life she wants—to be happy without guilt, to be accepted for herself, to love and to be loved, to just be—she has to put herself first, accept her imperfections, embrace her passions, and finally be the heroine of her own story. 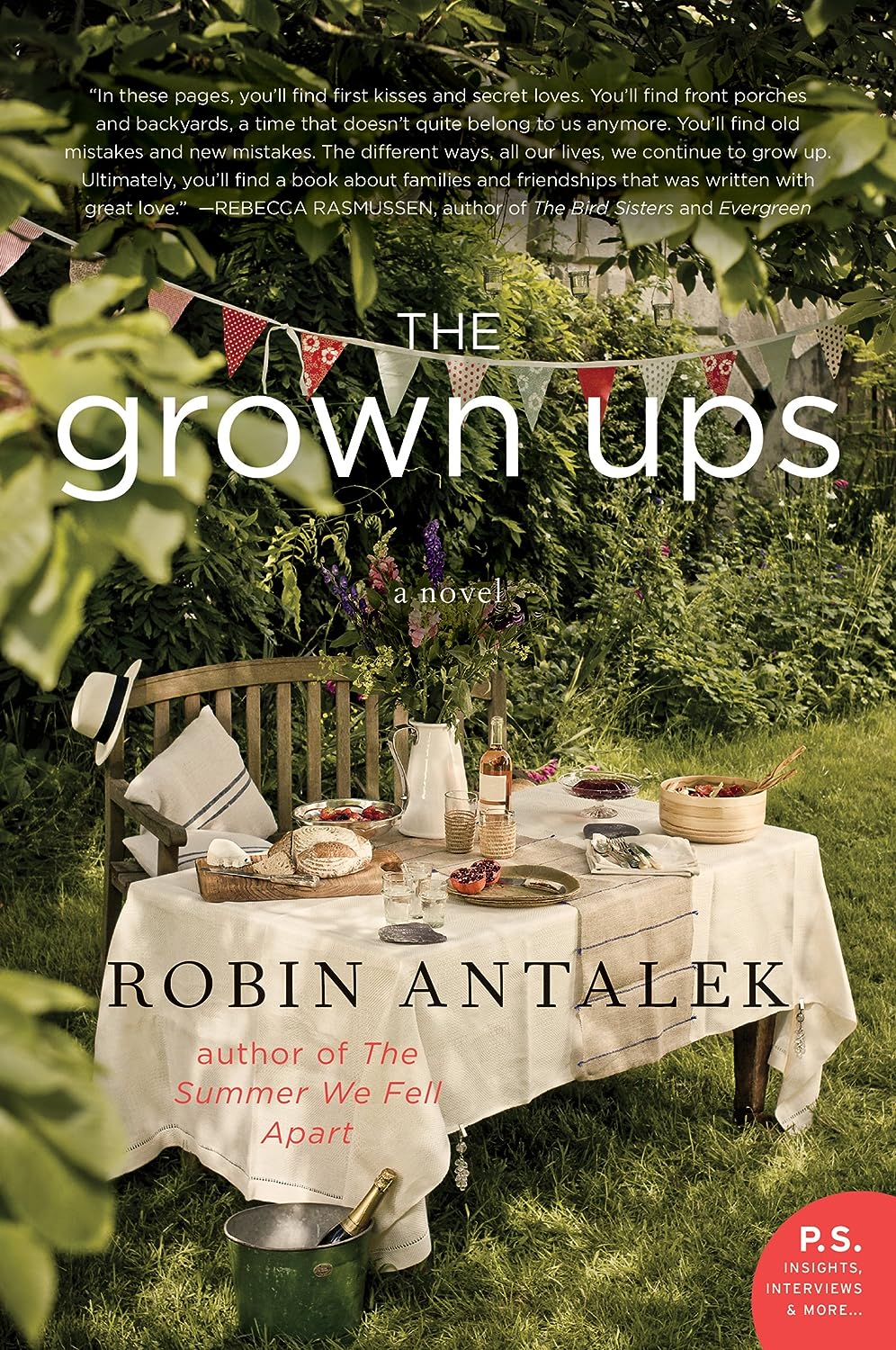 The Grownups(out on Jan.27th) : From the author of The Summer We Fell Apart, an evocative and emotionally resonant coming-of-age novel involving three friends that explores what it means to be happy, what it means to grow up, and how difficult it is to do both together.

The summer he’s fifteen, Sam enjoys, for a few secret months, the unexpected attention of Suzie Epstein. For reasons Sam doesn’t entirely understand, he and Suzie keep their budding relationship hidden from their close knit group of friends. But as the summer ends, Sam’s world unexpectedly shatters twice: Suzie’s parents are moving to a new city to save their marriage, and his own mother has suddenly left the house, leaving Sam’s father alone to raise two sons.

Watching as her parents’ marital troubles escalate, Suzie takes on the responsibility of raising her two younger brothers and plans an early escape to college and independence. Though she thinks of Sam, she deeply misses her closest friend Bella, but makes no attempt to reconnect, embarrassed by the destructive wake of her parents as they left the only place Suzie called home. Years later, a chance meeting with Sam’s older brother will reunite her with both Sam and Bella—and force her to confront her past and her friends.

After losing Suzie, Bella finds her first real love in Sam. But Sam’s inability to commit to her or even his own future eventually drives them apart. In contrast, Bella’s old friend Suzie—and Sam’s older brother, Michael—seem to have worked it all out, leaving Bella to wonder where she went wrong.

Spanning over a decade, told in alternating voices, The Grown Ups explores the indelible bonds between friends and family and the challenges that threaten to divide them.
Posted by ellie at 12:00 AM