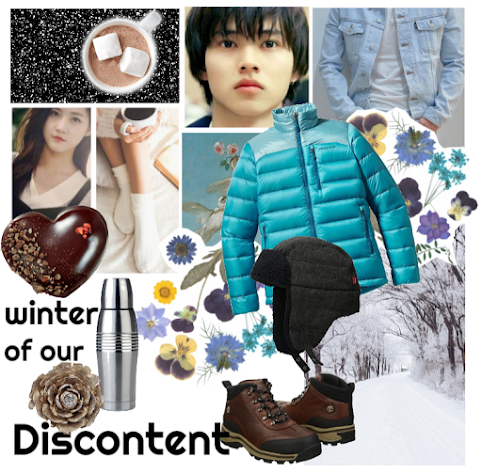 *Ollie & Valentina were in the same foster home, but he has moved on.

Valentina didn't stay out all night with Simon. They went to the movie and called it a night. She'd told him she'd wanted to be home to ring in the new year with her family. Of course, her parents weren't even home. They were out with friends.

Still, it gave her time to warm up the hot chocolate and take it in a thermos, down to the grocery store where she knew someone would be out in the cold.

"Did you have a good Christmas?" She asked Ollie, but what she meant to ask..if he'd missed her, yet she stalled, thinking he wouldn't tell her anyway. He would never tell her the truth about anything. She guessed.

She kept the hot tears, from escaping her eyes. She didn't want him to see how she really felt.

Ollie was reluctant to take the hot chocolate. He told her he could get it, in the store.

"But..but it's homemade. The way you like it." She remembered how he smiled when he had a cup before bed.

He was sullen as he ever was. Although, she knew he could smile. She knew his smile, like a warm summer day. She wanted to forget it, but she couldn't.

"What are you doing here?" He looked at her. "Why aren't you with your boyfriend?"

It sounded like a rerun on TV when he said it. She didn't really think of Simon as a real boyfriend. She wasn't sure why.

"He's being too nice to you. Is that it?" He opened the thermos and poured himself a cup.

She shrugged. Ollie sighed back.

"What did you get for Christmas?" She asked.

"Socks," Ollie said. "Lots of socks." He was straight-lipped, as if he needed to keep her aloof. "Guess, you got something good..like a new phone or something just as good."

"Of course." She did her best to swallow what he thought of her. Finally, a tear slipped down the side of her cheek. "We didn't always hate each other, you know." She wiped the tear away. Ollie looked away as if she wasn't supposed to bring it up. Valentina grabbed the sleeve of his coat. Ollie blew a breath.

"You..shouldn't be here." He told her, but she sniffed back more tears. He watched her cry, but finally got her to go sit in the dining hall. He told her he would be off in a few minutes so she waited for him in the back booth.

Finally, he sat down next to her and it felt good to be this close to him, but he didn't look at her right away. Or was it.. he didn't want her looking at him.

"You, don't need me around." He said to her. She nodded, but she burst into tears. He handed her a napkin.

"Stop..just ..just listen to me." She looked at him teary-eyed. "I think you're a good person." She told him she wanted to be with him. She'd always felt safe with him.

He pressed his lips tight and shook his head, no.

"But..it was like..like an adventure." She remembered the old houses and other haunts they trespassed together, last summer. "You'd never let anything happen to me, that I didn't want."

"And that's all you remember?" He looked at her sadly.

She took his hand. Maybe winter was setting in like a bad head cold of cabin fever, but the old desire lingered to go back to a wayward time when they knew each other's old soul.

"Maybe..maybe if..if we could..just touch." Wasn't that all it ever was? It felt much more, like a silver truth she would carry to the grave.

Her hands went under his puffy-coat and she hugged him as if she'd missed his heat, his breath and the scent of him.