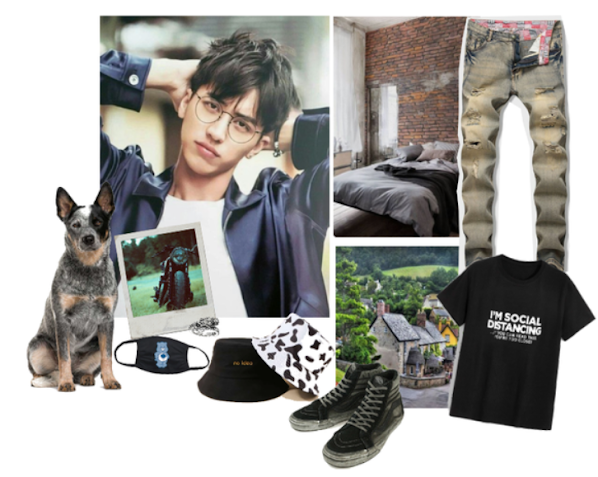 bio: Name - Maxie Chase Age- 25 Birthday- August 27th Siblings- a younger sister, Baily who is 18. Lives- from North Cornwall, England. His mother is from Shanghai, but many think he's indigenous. He never met his father, but the man he call's Ba, Sid Chase, has lived near the fishing boats all his life, but runs a pub and Maxie is no stranger to pub food and bartending. He grew up on Adam Ant and the Cure. His dad is old-school punk rock. Maxie has gone to occasional antifolk and folk concerts or whatever there is to go to in the past at the summer festivals.

Pets- Mojo a blue heeler that he raised and trained himself.

Hobby - He's always loved wide open spaces and always wanted to go on long trips on his motorcycle. But maintaining his bike for a long trip isn't as easy as it sounds. He probably tinkers with his bike more than he rides it. Usually, he gets around on a moped he fixed up. Making noodles. Oh, and playing darts with his mates and weekend footballing, as well at the youth center.

Job- He'd dreamed of being a footballer, but his temper got the best of him in his youth. He even ended up in a group home for a while. Thankfully, he's turned it all around and is a counselor at a youth center for troubled teens.

Kids- He's dreamed of having his own passel of kids, but it hasn't happened yet.

Girlfriend - He hasn't met her yet.

I had someone ask me to roleplay. Not sure if it will work or not. But here goes....