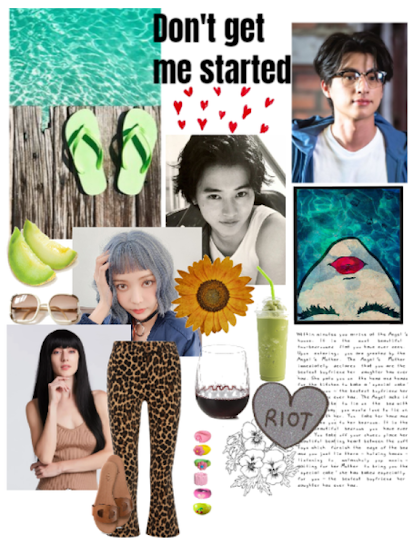 HOW DOES YOUR BEST FRIEND FEEL ABOUT WHO YOU HAVE MET?

Evan : Well, I think I've known Dez the longest of all my friends. I've always felt we could confide in each other, but the thing is...I just don't get what he sees in her. She is like a mouse. Who wants to date a mouse? I don't even think she's bookish. I don't know what she is. (He looks blankly as if he's still in shock) OK, so maybe going swimming at the lake was a bad idea. I just didn't want to see him with her. (He shrugs with a laugh) Dez can do so much better. I don't think this Stacy is smart. She looks rather stupid. She just isn't Dez's type. (He winces with a grimace). I want him to be happy. I mean, I know him. (He glares then with a festered look). She's not going to make him happy. Cher : It was cool meeting this dude of Stace's. I don't know where in the world she found him. (she winces) The laundry mat, I think. Who in the hell does that kind of thing anymore? (she sighs) I would never go to a laundry mat. Never. I dunno. I just expected she'd find a nerd. She needs a nerd. More nerds need to date, you know. (she smiles, almost snorts and wipes her knuckle across her nose) Honestly, who needs dating? Hang out online is where it's at. Doesn't she know how to text? Honestly, I don't like having physical contact with anyone. (she shakes her head) I don't see this lasting. HOW DO YOU FEEL ABOUT YOUR BEST FRIEND'S FIRST IMPRESSION OF YOUR SIGNIFICANT OTHER? Dez : My best friend is Evan who I have known since college. We occasionally get together to play basketball. He works in finance so he's got it made. He also might be just a little strange. (Dez grins) I mean I'm used to it. And well, I haven't dated in so long um, I don't know if Evan thinks of me having a girlfriend since he doesn't have one, either. So yeah, It was a shock to his system when I showed up with Stacy at the lake. I mean, he said I could bring someone, but I don't think he expected me to bring anyone. He was all set on spending the afternoon fishing and I guess we ruined it for him. (Dez sighs) I don't think he likes Stacey. At first, I thought it was because her hair is blue, but he goes deeper than that. He just can't stand her. He said he thought she was too loud and too short. He's already said I deserve better. I don't know what that means and I am not willing to find out. Even if he offered just before we left, he could set me up with someone who was really HOT. (Dez shakes his head) I dunno if I can be friends with him anymore. He definitely needs to respect who I'm seeing. It's like a wake-up call. I've never seen him this way. Stacy : Cher is my best friend. We work together. She's really into those role-playing games online. And I dunno (Stacy shrugs) it's like she's in a different universe. Sure she said Dez would make a great prince. I wasn't sure what she meant. Maybe we don't even speak the same language (she smiles) She thinks I'm ditzy. But she did go out to eat with us one Friday night. You know, we had a few beers and chatted. Of course, she's not in a romantic relationship. Actually, she said we were too old to be dating. (Stacy rolls her eyes) She's a great work friend, but I guess we should just leave that at work. I don't think we will do too much of anything together. She wanted us to get on the game she's playing, but I just don't have time for something like that. I guess Dez is OK with Cher. (she laughs) I'm not seeing Dez to make my friend happy.
Posted by ellie at 12:00 AM