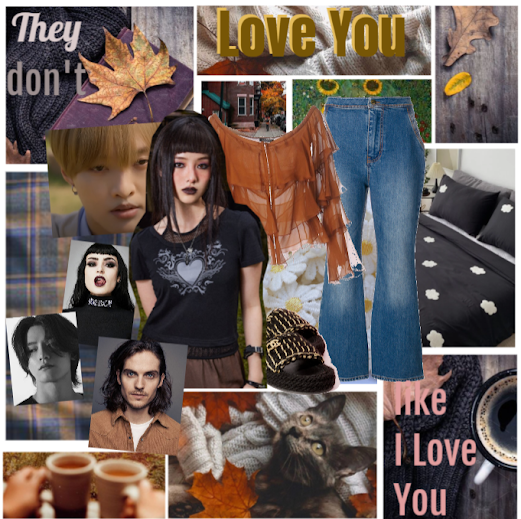 Paco was at his wit's end. Of course, it wasn't the same with Jones not around. But it was still their home. They would suffice. Sara had her ongoing web series when she wasn't trying to make music with Will in the bathroom (it was the only place in the house with the best acoustics and his synthesizer never went out like it did in the attic.) Everyone had something to do. Except for Audrey who was Jones' muse. She was there for Jones. She was his best mate, a confidant, and usually scratched his back if he scratched hers.

Yes, she was a runaway. No questions asked. Naturally, Sara didn't like women anyway and Will did whatever Sara told him to do. But they'd taken Jones away. He wasn't coming back. Nobody had the heart to tell her why. It was best to go on with things.

She'd gone through a series of uncertainties. She was mad. She threw out all his clothes, broke his guitar, and probably burned all the pictures of the two of them. She even told Paco she couldn't stand the smell of him. It was all so rotten.

Paco knew she'd be sad if she knew. But he kept going through the motions, making sure she had something to eat, something to read, and maybe help him out with the laundry from time to time. But suddenly, it was as if she knew it was time to go.

She left so suddenly in the middle of the night. It awoke him so he followed her the best he could. But when she saw him she hid from him as if he frightened her. So he went back home contemplating if he should stay put or keep searching.

Of course, neither Sara nor Will would have a thing to do with it.

"Why can't you just tell her he overdosed." Sara was as sullen as she ever was, crossing her arms and looking as if she was ready for a Goth photo shoot.

"I dunno where she is," Paco felt helpless. He hardly knew her, but he liked having her here. She didn't work. She couldn't really take care of herself.

"Well, maybe she would," Will said she was capable. She was Jones' girl.

"It wasn't like that," Paco couldn't help but lash out. "He was only trying to help her. He..he never.." Paco knew neither would believe him, but it was pure love. So what if Jones was a good twelve years older. He'd always treated her like a precious little sister, even when she was mad at him half the time.

"I don't know why you care," Will just didn't get it. Yet it made Paco care all the more. Somebody had to care.

So he searched for days. Just when he was about to give up, he would see her scavenge about. He left a backpack of treats for her. Of course, she found them but scurried away as if she might be mad at him. So he watched from a distance, trying to be patient. Trying to figure out Audrey. Had she found someone else? Did she need time alone? What was really up with Audrey?

Finally one night he followed her into an abandoned house, but he didn't chase her. He knew it would do no good. Yet, it was a longing to know if she was really OK. So he decided not to look for her, but to turn his back from her.

"It's not the same without you," he told her.

"Nobody misses me there," she then said. She knew how it was. Sara nor Will liked her. They were indifferent. It was impossible to think around those two loud people.

"What about me?" Paco then asked. "Do you ever think of me?" He felt quite sad about it. Of course, his job was only at the grocery store. He was no one special. He was a good listener who usually did most of the cooking and the chores. He wasn't exactly an artist. He knew he was boring. Suddenly the tears dripped down his face ever so warm and caressing.

Finally, she gave him a hug from behind as if maybe he was home after all.

This is based on a cat story about my friend's cat that was a rescue kitten. She'd been with them for five years and after her 'mentor' of sorts passed, she decided to become feral again. If only she'd come back. She slipped out of a window one evening.