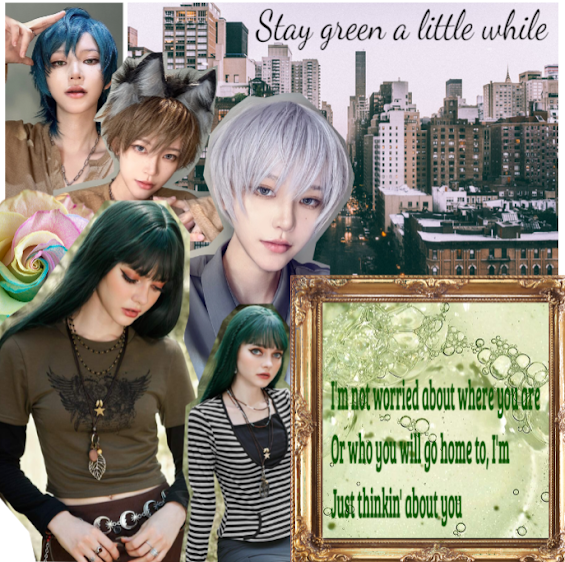 Name: Evanescence Age: 25 Good Habits: Well, he loved art. I feel he always knew he was a misfit. But when it came to art it was like a religion. Yes, he was hard to get to know. But I liked what I saw. I adored whatever he did. It was like I was in a trance or something. Maybe he picked up on that. But he was so quiet, and his nature was tranquil. I think he's a good person. He might have gotten grief by the way he dressed and what he called himself. But he was never just Evan. Bad Habits: Not wanting to talk. Not wanting to express his feelings about anything. It was his art that seemed to control him. I mean, he could be so warm on occasion, but not all the time. I can't say we drifted apart. Yet, I felt he was never there for me. What did you love about the EX? Oh, he could be so animated. He liked to tell me stories. Of course, they were made-up stories. He was actually very good at making twenty-minute meals with eggs and ramen. He always cleaned up after himself. And could be affectionate from time to time. Yet, it felt like a holiday when it happened. It did not happen all the time.
What did you hate about the EX? That he couldn't put me first. It was always art. It will always be art. He even said this himself. But I love his art. I know that sounds confusing. Yet, I know his goal is to get his webtoon out there and so..um.. yes would forget about me a lot.
How did you meet before this person became your EX? We knew each other from art class. Back when I thought I could be one, one semester. But I found out I don't have the skills. Really I couldn't make any art when I was around someone as perfect as him. Actually, I am not going to lie...I thought he was a girl, or maybe a guy trying to be a girl. But he's just Evanescence. And yes, he has his fans and of course, he ignores them completely. So I was kind of shocked when he talked to me.
What did the EX do to become THE EX? It was his idea that we should end it. He said he was only wasting my time and that I deserved better. Naturally, I was heartbroken because he was someone I will always care about. I still care so much for him. But he ignores my calls and text. It's over. It's been three years since I've seen him. It was like he wanted to fade away. Only he didn't.
Would you ever get back together? I don't see it happening, but in my heart it's already happened.
Posted by ellie at 12:00 AM