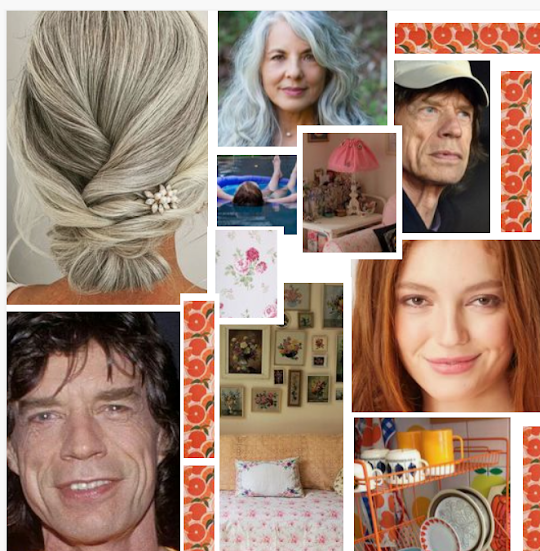 Honestly, she'd just about forgotten about him. Long ago, they'd spent the day together at the swimming pool. Her daughter always told her it was the best time of her life. Naturally, Laura laughed every time her daughter spoke of that time.  The time she met someone who looked like Mick Jagger at the pool. That was the year Kelsey turned sixteen and had a boyfriend of her own on her birthday. Of course, that only lasted three weeks.

Kelsey was in Cleveland now. Laura was still in Lawerence. Not that much had changed. Laura was still at the library and lived in the house that her husband left her. Of course, it was falling apart, but it didn't much matter anymore.

She was still hanging on at the library. She said she had another five years to go, but she knew neither her daughter nor her thought it so. Yes, all her friends were retired, babysitting grandkids and living life on a cruise when the pandemic would let them.

She didn't think she'd see Olaf again. Actually, she saw no one. Well, there was that guy Frank who people thought was her boyfriend. But he wasn't always in the mood. Sometimes, he flirted with the guys on staff. Sooner or later they figured out he was not the one. Which was a relief. Although, he honked at her in the past while out on a walk, really they seldom talked about musicals anymore.

And then Olaf came to the library one night that she worked. Somebody had mentioned they'd seen him from about a week before. She knew of his father's death. It was just, that she didn't know it would take so much out of him. His body was hunched over. The swag was gone. So were his funny jokes about being a bum.

He rambled about all his problems. Even the cat died in the end. He was so alone now. Of course, he'd never married. He'd never really had a job.

"Imagine that?" He looked at her as if he wanted her to be haunted, but maybe she was too tired by this time.

He wanted to get a document taken care of in the computer lab, but she'd told him it was too late. He didn't listen. And then he was mad when everything shut down. His document was gone.

"You'll have somebody taking care of you, before you know it," she thought he was dreadful. Sure, she knew he had his problems. He couldn't work as a machinist. He'd gone to school to be a machinist, but had only managed for a day on the job. It was true he couldn't do a lot under to many conditions.

He started telling her about his hand.

"Look at it," he said, all crippled she supposed, but she didn't really know. "I'm not supposed to be able to use it. My mom told me all about it. How she worked with it cause the doctors said I couldn't use it after I electrocuted myself when I was three."

Laura clamped her mouth. She wanted to say so much, but she knew it wouldn't do any good.

"Oh, Mom, aren't you glad nothing ever happened between you two," Kelsey said when Laura called her after work.

"Well, you know I would have never-"

"I know. But it's just a comfort to know that nothing ever happened," even Laura could hear the joy in Kelsey's voice. "Now don't go thinking to invite him over to dinner."

"I wasn't," but it did cross her mind. A part of her thought Olaf needed a vacation. Just not with her.